In 5 minutes of raw, honest, beautiful testimony and animation, our Khadafy Washington  Project 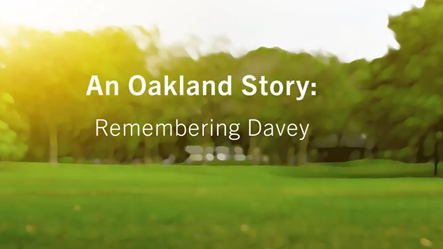 Coordinator Jasmine Hardison takes you on her journey of healing after the killing of her only son, Davey. Watch and listen and you will learn so much about a mother’s love, the pain of loss, the strength survivors find within themselves, and the power of healing. Thank you to the Brady Campaign to Prevent Gun Violence for producing this video with Jasmine.

From the Brady Campaign

For decades, the city of Oakland, California has ranked in the top ten most violent cities within the United States. Despite this, before 2020, Oakland had been experiencing consecutive, annual declines in gun violence thanks in large part to violence reduction programs.

By providing resources and support for those most at risk, Oakland was able to reduce homicides by 46% and shooting injuries by 49% from 2012-2017.

But in 2020 with the Coronavirus pandemic, its disproportionate impact on Black and Brown communities, and with resources stretched thin, Oakland surpassed 100 homicides for the year. This was a drastic increase from the city’s 74 homicides the previous year and was a prime example of how violence becomes more volatile when the needs of communities are not met.

In Oakland, Black residents make up only a quarter of the city’s population, but make up more than half of the city’s homicides. In fact, three out of four residents killed in Oakland are Black.

Davey McDaniel Jr. was one of 85 people killed in Oakland in 2016. He was only 21 when his life was tragically cut short by gun violence. The stories of gun violence survivors and family members of victims provide inspiration to advocates who continue to push for legislative and cultural change even in the face of obstacles.

In partnership with Brady Campaign to Prevent Gun Violence and Youth ALIVE!, Jasmine Hardison, a mother who is committed to creating a safer Oakland despite experiencing an unspeakable loss, tells the story of her son Davey.

Brady works with local, community-based gun violence prevention organizations in Oakland to build coalitions and work hand-in-hand with those most impacted by violence. Members of Brady’s Oakland Combating Crime Guns Initiative serve on the Violence Prevention Coalition and the California Violence Intervention and Prevention (CalVIP) grant program. The Initiative also works with local law enforcement and key stakeholders to ensure important information is released to the public, including a 2019 crime gun trace report critical to identifying irresponsible gun dealers, which was released in no small part, thanks to the advocacy of Brady and the Oakland Gun Tracing Group.

Brady’s work in Oakland is part of our Combating Crime Guns Initiative, which works to reduce gun violence in impacted communities by stemming the flow of crime guns into those areas, while holding irresponsible gun industry actors accountable.

King David Respect for Life works to realign the lives of at risk youth that have been affected by gun violence.

King David Respect for Life is a non-profit created by founder Jasmine Hardison who lost her only child when he was 21 years old. David McDaniel Jr., was tragically killed in Oakland, CA., after returning to a friend’s house from a date. A car pulled alongside of him as he was parking and opened fire, striking David once in the neck. David was transported to the hospital where he unfortunately passed away due to his injuries.