Youth ALIVE! advocates for sensible policies that reduce gun, gang, family and dating violence and that promote justice and equity for communities disproportionately affected by violence. 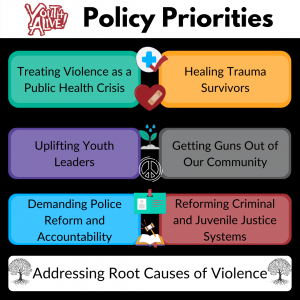 Youth ALIVE! knows that in order to achieve our goals of a safe, equitable, and just community, we need to change the conditions we live in. This is why Youth ALIVE! is strongly supporting the following bills in 2022. Thank you @NancySkinnerCA for authoring #SB993 and recognizing all crime victims and trauma survivors deserve access to the healing resources they need in order to recover after experiencing a violent crime. Click To Tweet

You can submit a letter to support or oppose these policies, too!

Additional policies we have taken action on:

AB 931: This bill would protect community members by allowing law enforcement to use deadly force only when it is necessary to prevent imminent death or serious bodily injury. Status: Died in Committee.

AB 1639: This bill would prohibit CalVCB from denying an application for a claim solely because the victim or derivative victim is a person who is listed in the CalGang system or alleged by local law enforcement to be gang involved. Status: SIGNED INTO LAW!

AB 2100 (Co-Sponsor): AB 2100, a bill that Youth ALIVE! co-sponsored, supports physical and emotional recovery for Californians injured by gun or other violence, through the Crime Victims Compensation Fund, to include services provided by community violence peer counselors. If you are interested in supporting this as well please see the fact sheet and use the following template. Status: Died in Committee.

AB 3131: This bill will enhance transparency and accountability in the acquisition of military equipment in our local communities. Status: Vetoed by the Governor.

SB 1232: This bill aims to extend the time period during which young crime victims may file applications for compensation from the California Victim Compensation Board Restitution Fund. Status: SIGNED INTO LAW!

SB 1242 (Opposition): We oppose this bill, which would add arbitrary hurdles to earning parole that are unrelated to public safety. Status: Died in Committee.

SB 1391: This bill would end the transfer to adult court of children 14 and 15 years of age.  Status: SIGNED INTO LAW!

Youth Reinvestment Fund (Support): This focuses on funding proven youth diversion programs that would keep California’s young people out of prison and give them the second chances they deserve.

AB 1674 Limit Firearm Purchases to One Per Month

AB 1726 Accounting for Health and Education in API Demographics Act

SFA Endorsements (Safety for All)

Support Flint Families Letter in Support of the Children of Flint, Michigan

SB 707 No Concealed Weapons on Campus

AB 169 Support letter to the Governor

AB 180 Support letter to the Governor

AB 1131 Support letter to the Governor

SB 140 Support letter to the Governor

SB 374 Support letter to the Governor

SB 755 Support letter to the Governor